6 Squadron is now the proud custodian of the MacRobert Fighter. This tradition dates from WW2 when Lady Rachel MacRobert lost sons in RAF service. She first donated £25,000 for the purchase of a Stirling bomber which was named “MacRobert’s Reply”. Later, following the loss of her second son in the Middle East leading an attack by Hurricanes against a German airfield, she donated a further £20,000 to purchase 4 Hurricanes, one of which was called “The MacRobert Fighter – Sir Roderic”. This title has now passed to a Typhoon of 6 Squadron.

ROYAL AIR FORCE: OPERATIONS IN THE MIDDLE EAST AND NORTH AFRICA, 1940-1943. (CM 3521) Two Hawker Hurricane Mark IICs presented to Middle East Command by Lady Rachel MacRobert, assemble in their positions for the presentation ceremony at El Gamil, Egypt. Four Hurricanes, three of which were named after Lady MacRoberts’ sons who all were killed flying in the early stages of the war, were handed over to No. 94 Squadron RAF by the Air Officer Commanding Air Headquarters Egypt, Air Vice… Copyright: © IWM. Original Source: http://www.iwm.org.uk/collections/item/object/205208975 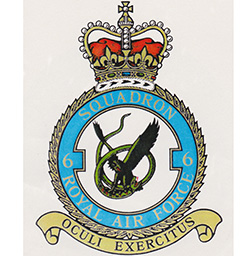